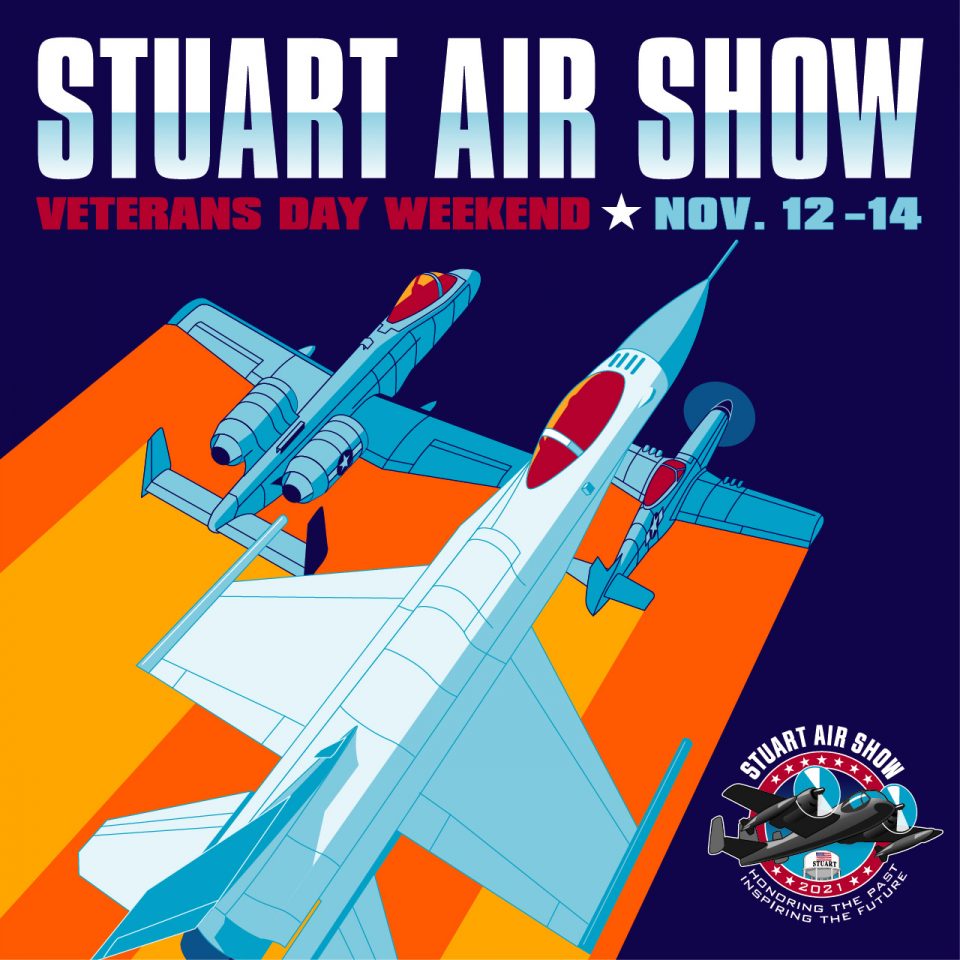 The Stuart Air Show is back in 2021 to highlight performances from more elite aerial performers than ever before.

The show features 2 United States Air Force military fighter jets, for now…
Confirmed to attend are the F-16 Demo Team (“Viper”), and the A-10C Thunderbolt II (“The Warhog”). Curious patrons will have to “taxi into position and hold” until the airshow has final confirmation of other military assets scheduled to attend.

For the first time ever at the show, the East Coast C-17 Demo Team will perform in front of the crowd! A high-wing, four-engine, T-tailed military transport aircraft, the multi-service C-17 can carry large equipment, supplies and troops directly to small airfields in harsh terrain anywhere in the world.

In addition, for the first time in North America, Red Bull Pilot Aaron Fitzgerald will do barrel loops and fly inverted in a BO105 C Helicopter.

Back by popular demand is the opening evening twilight air show and Dirty Flight Suit Party on November 12, 2021. Guests will be able to experience an amazing pyrotechnic show, and live entertainment provided by the best cover band in South Florida; The Chase Band. They will close out the evening on the Yuengling Flight Deck stage, powered by Florida Power & Light!

Not all the excitement will be exclusively in the air!  Stuart Air Show patrons will get to experience an incredible flight line race between the Shockwave Jet Truck and an aircraft. The jet truck holds the record for fastest in the world; title set at 376 mph!

The “Race the Runway 5K” also returns, allowing runners the chance to race through Martin County Airport in the hours before the show on Sunday, November 14th.  Runners will watch the sunrise over the show’s aircraft in this special experience.

The Stuart Air Show highlights the importance of aviation and the service of Veterans. It also provides hundreds of opportunities to schools and school-age children to learn about aviation, American history and about the Armed Forces. The Air Show is also a ‘fundraiser’ as well as a ‘friendraiser’ for many nonprofit organizations. Each year the Stuart Air show donates tens of thousands of dollars to area charities as well as service programs for children and Veterans.

From aviation enthusiasts and military veterans to families looking for a weekend activity, all can appreciate what the air show brings – the nostalgia of historic static displays, the sophistication of modern-day aircraft, and the roar of military jets and thrills of aerobatic performances.

The Stuart Air Show will be held November 12th through the 14th at Martin County Airport – Witham Field, 1895 Flying Fortress Ln, Stuart, FL 34996.  Gates will be open from 9am – 5pm during day shows and 5pm – 9pm during the night show.

More info about performers & events at the air show can be found at: www.stuartairshow.com

Tickets are available now online at: http://www.stuartairshow.com/tickets or by calling 772-837-9957.

Carrabba’s Italian Grill Give Back

Give the Gift of Gardening: Online Native Plant Sale