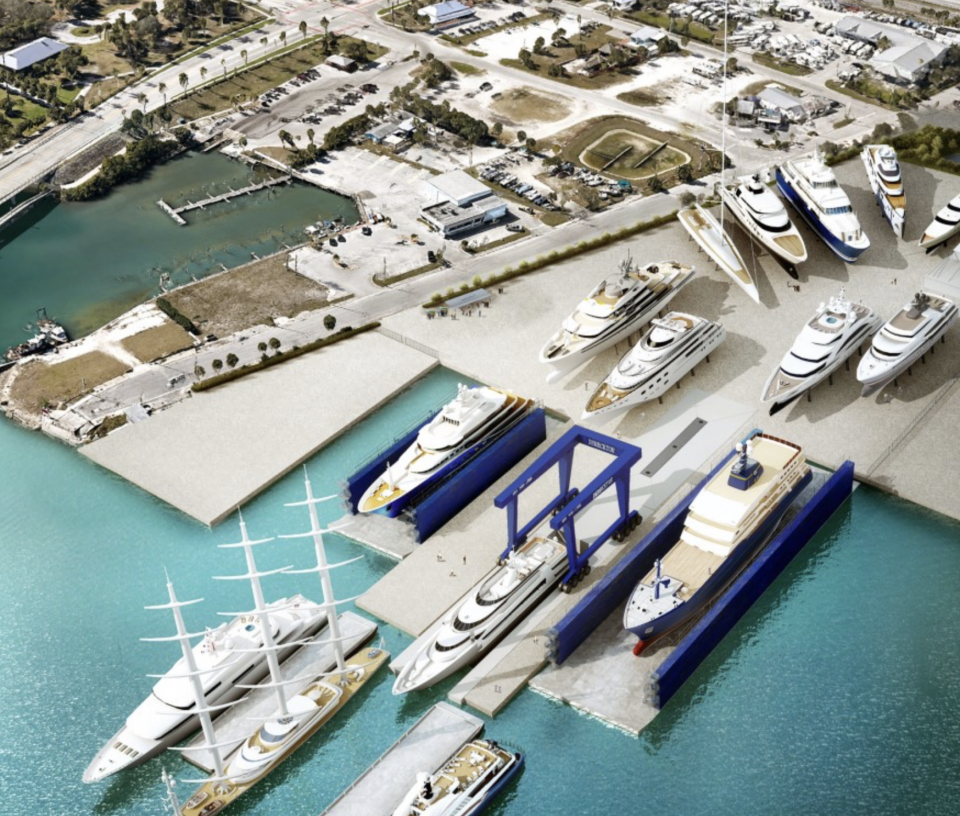 FORT PIERCE, FL. – Plans to convert the nearly 100-year-old Port of Fort Pierce into a full-service repair and refit facility for the global fleet of megayachts are moving ahead at full speed.

After 11 months of review, the engineering and plans for Derecktor Ft. Pierce’s new haul-out basin have been officially approved by the U.S. Army Corps of Engineers, paving way for construction to commence once the City of Fort Pierce Building Department gives its final approval.

“Securing a permit from the U.S. Army Corps was no easy feat, especially during a global pandemic, as it required review from several different departments,” Justin Beard, marketing manager for Derecktor Shipyards, said. “The haul-out basin is a critical piece of infrastructure at Derecktor Ft. Pierce and it will allow us to lift vessels up to 250 feet in length with our 1,500-ton mobile boat hoist.”

The haul-out basin measures 220 feet in length and 50 feet wide, comparative in size to one of the two concrete silos located adjacent to the Derecktor facility at the Port of Fort Pierce. Existing upland will be excavated from the concrete pier making way for 288 auger cast piles needed to support the relieving platform surrounding the perimeter of the haul-out basin.

Construction includes the installation of an intricate system of tiebacks, whalers and sheet pile, all of which will support the 1,500-ton lift under a full load of approximately 4.5 million pounds – or roughly the same weight as a fully fueled space shuttle preparing for launch.

“An extensive amount of engineering and logistics have gone into this project, and we’re looking forward to breaking ground,” Beard said. “Once construction of the haul-out basin begins, it will take 4 to 5 months to complete, so it won’t be long until the shipyard is able to service large yachts on the hard.”

The 1,500-ton mobile boat hoist will be shipped from Northern Italy to Port Everglades later this year and will be delivered to Fort Pierce by barge. Assembly of the massive machine will take 6 to 8 weeks to complete. Standing 85 feet tall, 75 feet wide and 120 feet long, the lift will be nearly as tall as Fort Pierce’s South Causeway and as wide as a six-lane highway.

Founded in 1947, Derecktor Shipyards has since become a worldwide leader for excellence in the construction, repair and refit of yachts, commercial and military vessels. Today, four Derecktor facilities span the Eastern Seaboard of the U.S. from Maine to South Florida, offering vessel owners and operators everything from marina space to megayacht construction. For more information about Derecktor Shipyards, visit www.derecktor.com, email jbeard@derecktor.com or call 772-595-9326.