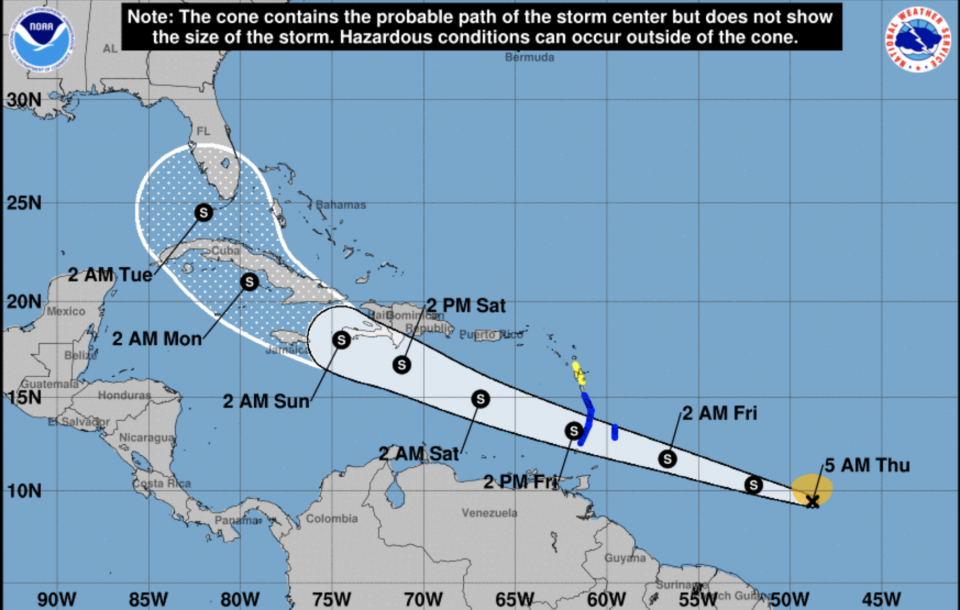 Miami, Florida (treasurecoast.coom) – Tropical Storm Elsa formed early Thursday morning and most of South Florida is in the cone of uncertainty.

Elsa is now the earliest fifth named storm on record. The previous record holder was Edouard in 2020.

Most computer models take the system over the Greater Antilles on Friday, Hispanola on Saturday and Cuba on Sunday and Monday, then toward the Florida Peninsula early next week.

On the forecast track, the system will pass near or over portions of the Windward Islands or the southern Leeward Islands on Friday, move into the eastern Caribbean Sea late Friday and Friday night, and move near the southern coast of Hispaniola on Saturday.

If the same track continues, Elsa would arrive in South Florida early Tuesday.

It’s important to note that while some of the viewing area is outside of the cone, including Vero Beach, impacts can be felt even outside of the cone. Also, the chance of seeing tropical storm force winds at this point is low (less than 10%).

Kevin Guthrie, the director of Florida’s Division of Emergency Management, said a federal urban search and rescue team will arrive in Surfside on Wednesday to assist with the ongoing efforts. That will free up local first responders in the event there’s a tropical cyclone and any storm-related emergencies arise.

Guthrie said that if a tropical depression or storm develops, plans are in place to handle both situations simultaneously, including facility relocation and communications.

A second area of disturbed weather that’s east of the Lesser Antilles is expected to interact with some stronger wind shear by the end of the week.

Regardless, it could bring strong winds and heavy rain to parts of the Caribbean Sea by Thursday and Friday.