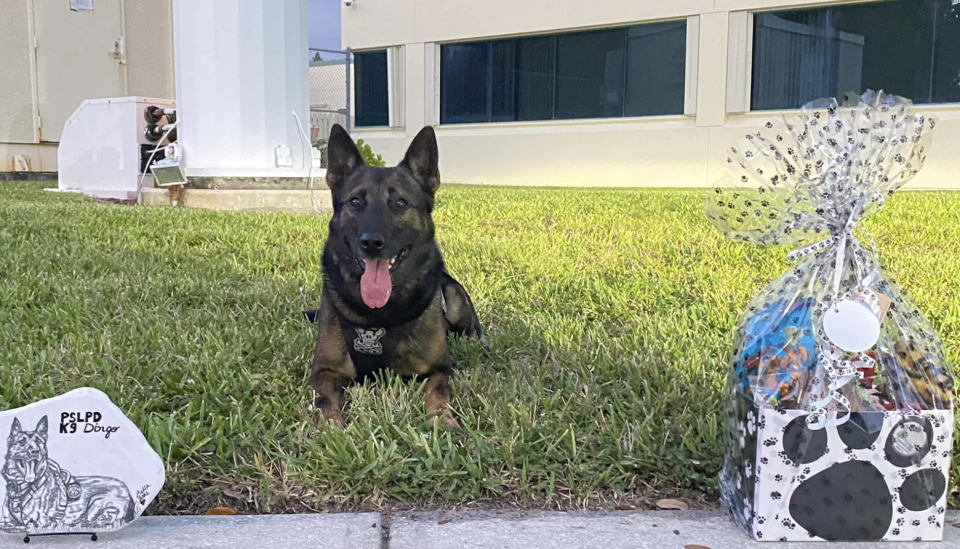 K9 Dingo back on the job!

Port St. Lucie, Fl (treasurecoast.com) – K9 Dingo is back on the job!

The Port St. Lucie Police Department announced Thursday that a valuable member of its team is back after being injured last week while apprehending a fleeing suspect.

The incident occurred in the early morning of Oct. 2 in the 400 block of SW McClellan Street.

Officers were dispatched to the scene about a loud noise complaint and found Smith, who they say had a felony arrest warrant revoking pretrial release for aggravated battery with a deadly weapon.

According to police, Smith fled towards a nearby house. K9 Officer Gibbins gave multiple warnings before deploying Dingo.

Dingo grabbed a hold of the suspect’s right foot as he began to swing his legs over the fence.

Dingo was kicked multiple times as the suspect tried to free himself. The K9 was taken to the Veterinary Medical Center of St. Lucie County. Police said X-rays were negative for any fractures and Dingo was given medicine for a soft tissue injury.

He remains locked up, police stated.

Dingo will be at Keiser University’s Fall Festival this Saturday from 11:00am-2:00pm