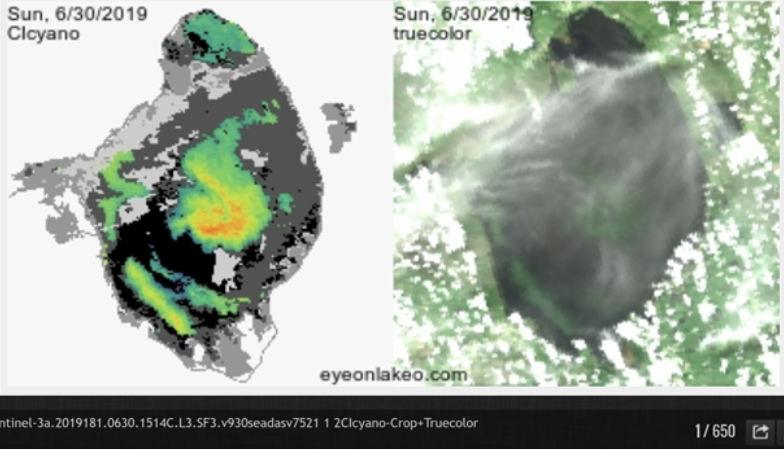 Martin County, Fl- New concerns over a blue-green algae bloom on Lake Okeechobee in western Martin County, after test results show high levels of the toxin microcystin. The toxin was found at levels three times over what the EPA considers safe for swimming.

Last May the CDC started studying the effect on fishing guides but many of them balked at the study. Basically they said “There is nothing to see here!” They also expressed not wanting any bad press. Essentially they are willing to put every child that lives around the Lake at risk because of what they perceive as bad press.

This is why it is  impossible to work with these folks. They use hyperbole and rhetoric in place of common sense.

I say let the CDC do their study and protect the people around the lake.

I also urge everyone to watch “The Toxic Puzzle.” It’s online for a few dollars.

NCCOS conducted a study of airborne health risks from Cyanobacteria Blooms in Florida. 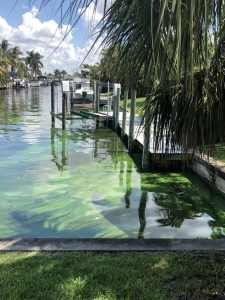 Background
In November 2018, NCCOS provided an Event Response award of $5,000 to FGCU to aid efforts to identify whether cyanobacterial (blue-green algae) blooms of Microcystis active around Cape Coral, Florida, are producing airborne toxins or particles. The goal of the program was to determine whether toxin and cell particles are present and to identify particle sizes (smaller particles can be more deeply inhaled into the lungs).

For several months in 2018, intensive Microcystis blooms plagued communities along the tidal Caloosahatchee River and adjoining canals around Cape Coral, Florida. The Florida Department of Environmental Protection (FLDEP) had been conducting conducted monthly sampling in the area and reported on the presence of Microcystis aeruginosa and microcystin toxin concentrations in the water. On September 17, 2018, FLDEP measured microcystin concentrations of 46 μg L-1(micrograms per liter). According to the World Health Organization, microcystin concentrations greater than 20 μg L-1 in recreational waters are considered “high risk” for acute health effects.

With microcystins present in coastal waters near Cape Coral communities, residents expressed concerns about health risks from exposure to microcystins via inhalation of aerosols or particles (i.e., “algal dust”). However, there had been no conclusive scientific evidence supporting an airborne vector for microcystin exposure.

To start to address this question, the research team developed a pilot air sampling program, and in September 2018 began collecting air filter samples from two sites. The first was on a residential property on a dead-end canal along the tidal Caloosahatchee River next to a waning but ongoing Microcystis bloom, The second, a control site at the FGCU Vester Field Station was 25 miles upwind from the first location and where there was no bloom. Air samplers were run for 20 days, from September 21 to October 11, 2018 and water samples were also collected, before and after deployments at each site.

The team completed a third air sampler deployment from December 21, 2018 to January 18, 2019 at the FGCU-Buckingham Complex in eastern Lee County. This location is at least one mile from any retention ponds  and three miles from the Caloosahatchee River, and was selected to determine if it was possible to have a “non-detect” or zero measure of airborne cyanotoxins. Dr. Michael Parsons, FGCU project lead, hoped to be able to establish a “zero baseline” from this control deployment. Instead, sampling results showed low but measurable cyanotoxin levels. This may indicate the potential for airborne cyanotoxins to travel more than a mile inland or provide evidence for naturally occurring background levels of toxins in the air.”

This stuff is airborne and if you live around the lake I would be concerned. I would hope that every fishing guide would participate. I would also hope that our local news would stop with the soundbites that the water is fine when it contradicts the actual science.

Meanwhile, the Florida Department of Environmental Protection is formally accepting information through July 15th on ways to prevent, combat or clean up harmful algal blooms in freshwater bodies and estuaries. The better ideas will go before the state algae task force in August. The task force won’t be asked to pick proposals or vendors but to determine if projects have merit to move forward for potential state grant funding. Some people making proposals could be asked to appear before the task force to answer questions about their proposals. The focus of the task force is Lake Okeechobee and waters on both sides of the lake, but the state is also looking at possible algae impacts as far north as the St. Johns River. “